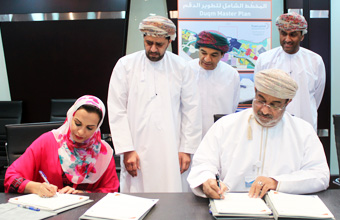 An agreement for Duqm Special Economic Zone Authority\'s land development was signed on 06th February 2013.
Two land plots have been allocated for the new project, the first of which has an area of 110,000 sq mts and it will be used to establish exhibitions. The second, with an area of 73,567 sq mts, will be used to set up stores.