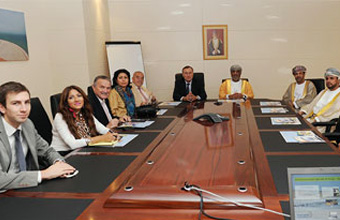 MUSCAT - Yahya bin Said al Jabri, Chairman of the Special Economic Zone Authority at Duqm (SEZAD), received at his office in the Knowledge Oasis Muscat (KOM) today a delegation of the French Senate, currently visiting the Sultanate. During the meeting, Al Jabri reviewed aspects of the joint cooperation between the Sultanate and France, commending the good relations binding the two friendly countries. He stressed the importance of enhancing them to cope with the aspirations of the peoples of the two countries. He explained that during the years of the blessed Renaissance, the Sultanate has worked to prepare the appropriate atmosphere to attract the foreign investments through packages of laws, legislations and incentives, pointing out that establishing the Special Economic Zone in Duqm comes within the framework of the Sultanate\\'s efforts to diversify sources of income and attracting the foreign investments, as well as developing the Governorate of Al Wusta and achieving the balanced development among various governorates of the Sultanate.
Al Jabri added that the government investment about RO 1.7 billion to set up the infrastructure for the zone throughout the port, drydock, airport, tourism and road projects and other projects, pointing out that during the past period, SEZAD organized a number of seminars in various countries to highlight the advantages of investment in the zone. He affirmed that the seminars came up with a number of positive outputs as the zone is currently witnessing a variety of investments. Al Jabri affirmed that SEZAD welcomes the French investors as it will provide all the facilities they need, pointing out that there are a number of areas in which the French companies can invest. Head of the French Senate delegation hailed the progress being witnessed by the Sultanate in various spheres, explaining that the visit availed an opportunity for the delegation to view various aspects of development in the country, expressing his admiration over the variety of projects being witnessed by the Special Economic Zone in Duqm