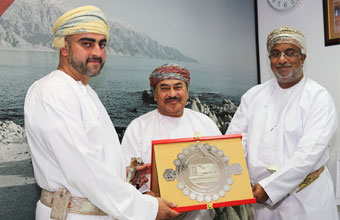 Bank Muscat, the flagship financial services provider in the Sultanate, as part of its commitment to add value to national development initiatives, opened a state-of-the-art branch in Duqm. H.H. Sayyid bin Taimour bin Assad Al Said was the guest of honour at the inauguration attended by H.E. Yahya bin Said Al Jabri, Chairman of the Special Economic Zone Authority at Duqm, and AbdulRazak Ali Issa, Chief Executive of Bank Muscat.
H.H. Sayyid bin Taimour bin Assad Al Said congratulated the bank for opening the new branch in Duqm, thereby providing world class banking services in the area which is witnessing mega developments. \\'We are thankful to Bank Muscat for its valuable services complementing the economic developments benefiting citizens and visitors in the wilayat of Duqm and we look forward to stronger future partnership with the leading bank.\\'
AbdulRazak Ali Issa said: \\'The bank\\'s involvement in Duqm Port and special economic zone projects stems from its commitment to the government objectives to diversify the national economy in non-oil sectors, creation of employment opportunities to young educated Omani youth and expansion of industrialisation in the Sultanate. The expanding branch network, especially in areas where developmental activities are gaining momentum, highlights Bank Muscat\\'s focus to remain the nation\\'s bank of first choice. The extension of the branch network in Duqm reiterates Bank Muscat\\'s commitment to the country\\'s future development.\\'

Over the past 32 years, Bank Muscat has achieved steady and significant growth to emerge as the leading financial institution in Oman. Setting new benchmarks, Bank Muscat offers the complete range of banking products and services through the network of branches across the length and breadth of Oman. The sophisticated banking experience stems from the right mix of traditional and electronic channels.