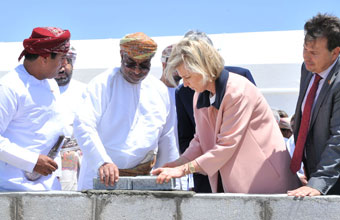 Princess Astrid, the Representative of the King of Belgium, visited the Port of Duqm, accompanied by Dr. Ahmed bin Mohammed al-Futaisi, Minister of Transport and Communications and Yahya bin Said al-Jabri, Chairman of the Special Economic Zone Authority at Duqm (SEZAD), and her delegation currently visiting the Sultanate.
During the visit, three agreements were signed. They are: Concession agreement, Grant of Usufruct agreement and development agreement in the Wilayat of A\\'Duqm in the Governorate of Al Wusta.
The agreements were signed on behalf of the Sultanate\\'s government by Yahya bin Said bin Abdullah al-Jabri, Chairman of SEZAD, and by Dr. Ahmed bin Mohammed al- Futaisi, Minister of Transport and Communications and Chairman of Board of Directors of Port of Duqm Company and on behalf of Port of Antwerp by Marc Vanbelle.
Dr. al-Futaisi, said in a statement that \\'this visit is a major step in the development of Duqm Port as the comprehensive layout of the economic zone in A\\'Duqm was designed with a total area of about ( 250) hectares as a first phase focusing on the industries of metallurgy and those associated to mining as the port is close to mines and quarries, adding that Duqm Port is on the world map for ports where it receives large commercial activities and is a major achievement of the Government of the Sultanate.
On his part, al-Jabri, pointed out that the agreement on the rights of the concession given to the company, which was founded by the Government of the Sultanate and the Port of Antwerp, which owns 50%, beside the Sultanate, gives the concession rights to operate the port, adding that this is a promising and positive start. He explained that the visit will have positive effects to attract the Belgian investment to A\\'Duqm zone.
Princess Astrid, the representative of the King of Belgium and Yahya bin Said al-Jabri laid the foundation stone of the first phase of the industrial zone in Duqm and inaugurated the logistical services complex in Duqm Port in the presence of the Minister of Transport and Communications.
This inauguration is a real breakthrough for important projects in Duqm that would contribute to the diversification of the national economy and be one of the key drivers for the trade with the nations of the world, and also contribute to increase the movement of goods to and from the A\\'Duqm.
On the sidelines of her visit to Duqm Port Princess Astrid toured the port, which is one of the important and vital projects in the Sultanate and the main gateway for investment in the region by virtue of its strategic location overlooking the Arabian Sea.

At the conclusion of the visit, Princess Astrid granted two medals (Order of Leopold) to Dr. Ahmed bin Mohammed al-Futaisi Minister of Transport and Communications and Yahya bin Said al-Jabri, Chairman of SEZAD.