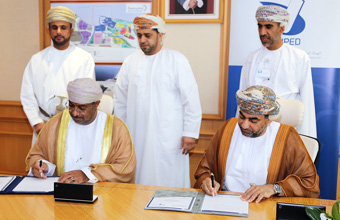 Oman\'s Special Economic Zone Authority at Duqm (SEZAD) in partnership with the Public Authority for Investment Promotion and Export Development (PAIPED) signed on Thursday a Memorandum of Understanding (MOU) designed to promote Duqm SEZ to domestic and international investors.
The MoU was signed by HE Dr Salem ben Nasser Al Ismaily, Chairman, PAIPED and HE Yahya bin Said Al Jabri, Chairman, SEZAD.
PAIPED\'s Chairman, said: \'This MoU will get both Authorities to highlight Duqm SEZ as a major success story that will generate significant international business interest. It will attract companies and bring in significant investment. Its potential is enormous.\'
Located in the Al Wustah region in Central Oman, 550 kilometres south of Muscat, Duqm SEZ is the largest development of its kind in the MENA region and has already attracted significant interest from businesses in Asia, Europe and the Americas. Strategically located on the Arabian Sea coast, Duqm SEZ is tipped to become a key hub and gateway not only to Oman, but also to the rest of the Middle East, North and East Africa and South Asia regions.
Conceived as a logistics hub, Duqm SEZ covers 1,770km2 and has been earmarked as Oman\'s next industrial centre, with investments of up to US$15 billion targeted in petrochemicals and infrastructure over the next 10 years. The government is also targeting US$5 billion foreign investment in Duqm over the next five years, and projects worth US$18 billion have either already been built or are planned for the town.
\'Working together, PAIPED and SEZAD will promote Duqm SEZ which has the potential to take Oman\'s industry to new heights and increase the Sultanate\'s import and export trade, providing lucrative upstream and downstream opportunities for local and foreign investors at both ends of the supply chain. Moreover, it has advantageous investor benefits, including 100% foreign ownership. Combine that with existing trade agreements and financial incentives, and Duqm SEZ becomes a highly attractive proposition,\' remarked HE Dr. Al Ismaily.
HE Al Jabry said at Thursday\'s press conference: \'I want the world to know about the outstanding opportunities and assets on offer in Duqm, and by partnering with PAIPED we\'ll gain access to the Authority\'s network of international trade representatives as well as co-organize a range of marketing initiatives as well as jointly attend international trade shows that will help us sell Duqm SEZ in a more co-ordinated and compelling way. This is a very strong partnership that will yield significant results for Duqm.\'