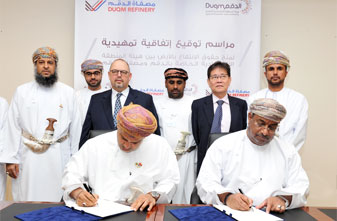 Yahya Al Jabri: The petrochemicals industry is an instrument to diversify sources of income and enhancing revenues.

H.E. Yahya bin Said bin Abdullah Al Jabri Chairman of the Board of Directors of the Special Economic Zone Authority at Duqm signed today (24 November 2014) in his office at KOM, a preliminary usufruct agreement with Duqm Refinery and Petrochemicals Industries Company that allows the company access and use of the location selected for the project which is around (900) hectares to carry out field studies, preparatory and clearance works to advance in the project to build a refinery within the set schedule. Eng. Isam Al-Zadjali, Chairman of the Duqm Refinery & Petrochemical Industries Company and CEO of Oman Oil Company signed the agreement on behalf of the company.

Duqm Refinery and Petrochemical Industries Company was established in 2012 in a joint venture between Oman Oil Company (OOC) and the International Petroleum Investment Company (IPIC), which is owned by the government of Abu Dhabi. The refinery is one of the most prominent heavy-industry ventures that will be set up at SEZAD with a capacity to process around (230) thousand barrels a day from a variety of crude mixtures.

According to the Agreement, both of SEZAD and Duqm Refinery and Petrochemical Industries Company are committed to reach a final agreement in a period that does exceed (12) months from the signing of the agreement, in terms of the development program and usufruct of the land that will be allocated for the project. The agreement also stipulates to find a legal and organizational framework through which both of the signing parties can negotiate, discuss and reach arrangements regarding their obligations toward the project.

H.E. Yahya bin Said bin Abdullah Al Jabri Chairman of the Board of Directors of the Special Economic Zone Authority at Duqm emphasized the importance of this agreement which marks the launch of heavy-industries at SEZD. H.E. said that the Duqm Refinery is one of the growth engines of the Special Economic Zone in Duqm with respect to petrochemical industries, pointing out that there are many petrochemical projects that will be set up at SEZAD that will benefit from the products of the refinery, and that the presence of the refinery will contribute to the development of SEZD and to the implementation of many Small and Medium Enterorises.

H.E. noted the importance of petrochemical industries in creating added-value to crude oil, that leads to enhancing revenues and realizing economic diversification in addition to creating jobs for our young people. SEZAD Chairman also said that there is an increasing demand for these industries and SEZAD is working to provide the appropriate infrastructure required by these industries.

On his part, Eng. Isam Al-Zadjali, Chairman and CEO of the Duqm Refinery & Petrochemical Industries Company said, “Entering into the preliminary usufruct agreement with The Special Economic Zone Authority is one more step towards the commissioning of the ‘Duqm Refinery’ project that will play a significant role in supporting the growth of the national economy. As one of the key developments in the Sultanate’s energy sector, the refinery will be a major element in positioning Duqm as the next regional hub for hydrocarbons’ product storage, as well as refining and petrochemicals, while complementing other up and coming projects in the area. Building on the area’s strategic location, the project will also add intangible value to the ‘Duqm Brand’ and contribute to the introduction of new industries in the local and regional landscape of the energy and energy related sectors”.

SEZAD is currently implementing a number of projects related to Duqm Refinery including a surface water drainage project and protection of industrial area seafront project.

The designs for the Duqm Seawater Intake Plant (DSIP) for cooling purposes are currently being prepared. Different industrial projects will benefit from this project including Duqm Refinery. In addition, bulk liquid materials berth project is now in the engineering design phase. This project will serve the process of handling crude oil and petrochemical products from the Duqm Refinery. In addition to the project, another project is in the consultancy phase which is service lanes and facilities project that aims to provide the necessary paths to pipes and service lines such as electricity, water and petrochemicals and other materials to the refinery.