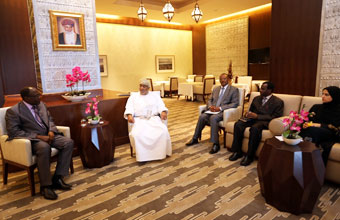 His Excellency Yahya bin Said Al Jabri, Chairman of Special Economic Zone Authority at A\'Duqm (SEZAD) Board of Directors, welcomed members of the Tanzanian delegation today at the Crown Plaza Hotel accompanying Dr. Mary Nagu, Minister of State in the prime minister\'s office for investment and empowerment.
During their short visit, which extends up to 11th of September, the Tanzanian delegation plan to review the Sultanate\'s experience in the field of developing economic zones and investment projects in several Omani ports. During their meeting, His Excellency Al Jabri stated that SEZAD\'s goal to attract foreign investments relies on the efforts made to diversify sources of national economy, and ensure impartial development in all parts of the Sultanate by creating job opportunities for Al Wusta locals. Furthermore, Al Jabri highlighted some of the competitive edges of SEZAD, such as being the biggest special economic zone in MENA region, and the variety of incentives that are provided to investors. He added that SEZAD is divided into 8 main areas that comprise the dry dock, the port, the petrochemical industries complex, the fishing marina, the fish-processing complex, the tourist, residential and business area, and the logistic center and Duqm airport.
\'While the government has already started building the infrastructure and other requirements for the growth of the Zone, it encourages local and foreign investors to venture in the different projects. SEZAD urges the Tanzanian businessmen to benefit from the many business opportunities in the zone as this will enhance the relations between both sides\'. He added.
Dr Adelhelm Meru, Director General of the Export Processing Zone Authority of Tanzania, expressed his gratitude and eagerness over his short visit to the Sultanate.
\'We are developing a new economic zone and hope to benefit from the Sultanate\'s experience in this field\'. He said.

The members of the Tanzanian delegation visited the Port of Duqm and the Dry-dock earlier today where they were briefed about the projects carried out by SEZAD and the economic advantages of its geographic location.