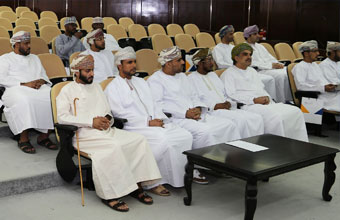 Duqm Special Economic Zone Authority renewed its invitation to the local private sector to invest in the zone, asserting the availability of plenty of investment opportunities and a package of incentives, facilities and benefits to favorably encourage investors.

Duqm Special Economic Zone Authority held a seminar at the headquarters of the Oman Chamber of Commerce and Industry branch at Dhofar that was a part of a series of local seminars and events organized and inaugurated by Duqm Special Economic Zone Authority since the beginning of this year for the purpose of informing the local private sector about the investment opportunities available at the free zone.
Duqm Special Economic Zone Authority’s Vice Chief Executive Officer; Ismail Bin Ahmed Al Bloushi stated that ongoing projects underway in the free zone such as the Duqm port, the dry dock, the refinery, the airport, heavy petrochemicals industrial projects, warehouses, logistical services and tourism projects are all aiming at supporting the economic diversification plan, and these project will provide promising investment opportunities to the local private sector, small and midsized enterprises "SME", as well as, promising employment opportunities to young Omanis.
Al Bloushi added during his address to the seminar that the Duqm Special Economic Zone Authority seeks to attract investments in the Sultanate of Oman, pointing out that the authority endeavored that the incentives and benefits package offered to investors are up to if not far beyond the investors’ expectations. He added Royal Decree No. 79/2013 promulgating Duqm Special Economic Zone Law stipulates a package of facilities and benefits that meets investors’ expectations and ambitions and boosts the zone’s competitiveness threshold.
He further noted Duqm Special Economic Zone Authority has created the one station services point with the aim of availing the best level of services for investors, adding that such services include the issue of commercial registrations, the zone’s lands usufructuary licenses, the registration of usufruct contracts, the issuance of municipal licenses and environmental permits, and other permits including without limitation industrial, tourism and mining licenses in addition to a host of other services.
The seminar featured two presentations, the first was delivered by Director of the Labor License and Investors Visas Department; Sultan Al Shraiqi which covered the investment opportunities availed and offered by the free zone.
The second presentation was delivered by Engineer Hussain Al Zadjali in his capacity as the Buildings Projects Officer and which covered the projects underway at the free zone.