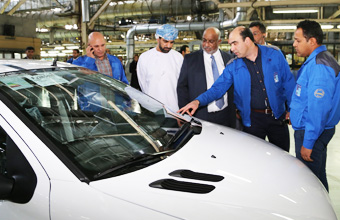 SEZAD Chairperson visits IKCO factory in Tehran and briefed on manufacturing techniques
H.E. Yahya bin Said bin Abdullah Al-Jabri, Chairperson of the Board of Directors of Special Economic Zone Authority Duqm and his accompanying delegation paid a visit to Iran Khodro Industrial Group (IKCO) factory, the largest car production factory in the Middle East. This was a part of the promotional campaign (Duqm Invites You) organized by SEZAD from 27 September to 1 October 2015.
H.E. was briefed on the company\'s capabilities, types of cars produced, production lines, manufacturing stages, motor production methods and other stages and operations related to the car production.
During the meeting, IKCO officials touched upon the steps completed within its efforts to establish a car assembly plant in the Special Economic Zone Duqm (Zone) in partnership with the Oman Investment Fund. They pointed out that they had already agreed on several steps for the establishment of the plant noting that SEZAD has allocated land for the factory there is remains the signing of the partnership agreement between the company and the Oman Investment Fund. The expected investment for the said plant in Duqm shall be about US$ 200 million.
H.E. Al-Jabri confirmed that SEZAD would provide all the facilities IKCO may need for the establishment of the plant in the Zone, stressing that this plant would have many economic benefits for the Omani and Iranian sides.
Iranian officials said they want to establish a number of other projects in the Sultanate in partnership with local investors, pointing out that the car assembly plant targets access to the markets of Asia and Africa as the Zone is close to them.
IKCO owns seven plants for car production around the world. In its plant in Tehran, it uses modern techniques and robots as well as thousands of workers. Its annual output is one million cars a year and looks forward to increase its production to reach three million cars a year over the next ten years.
H.E. Al-Jabri expressed his admiration of the developments of the automotive industry in Iran, pointing out that the relationship between the Sultanate and Iran is strong, and that both sides seek to strengthen economic relations to the level of political relations. He welcomed the establishment of the car assembly plant in the Zone and the various Iranian investments, stressing that the Zone is an ideal place to establish this factory due to its proximity to Asia and Africa markets, the presence of Duqm Port and many facilities and incentives provided by SEZAD to investors.