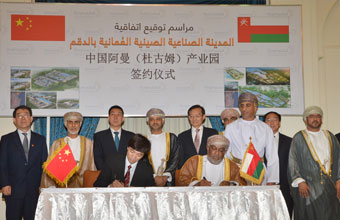 H.E. Yahya bin Said bin Abdullah Al-Jabri expressed his delight on signing the agreement confirming his welcoming of the Chinese investment in Duqm.

Al-Jabri praised the historical, political, and commercial relations between the Sultanate and the Republic of China dating back to many centuries. “Unde the reign of the modern Renaissance, the Sultanate seeks to translate these relations both politically and economically for the benefit of the peoples of the two countries,” indicated Al-Jabri.

“The Chinese investments in Duqm are a great addition to the current investments in SEZD. SEZAD is keen to diversify investments SEZD. Its efforts made during the past years have attracted investments from the GCC, Asia, and Europe. We hope that that diversity would contribute to attract Omani experience specialized in many areas related to ports, petrochemical industries, fishery industries, tourism, trade and other areas.

(Oman Wanfang L.L.C is the main investor in the project that spreads over a total area of ​​about (1172) hectares, i.e. (11.72) square kilometers divided into three main categories. The first area of ​​about 870 hectares shall be indivisible and allocated to heavy industries and areas of medium, light, and mixed use. Wanfang would allocate this land under sub-usufruct conventions to other Chinese investors and companies. Wanfang will be responsible for operation and maintenance of infrastructure on site unless applicable systems in the Sultanate require otherwise.

The two sides agreed on the minimum development requirements undertaken by Oman Wanfang and implementation phases, which will include development of infrastructure facilities and the establishment of a number of end-user projects. Oman Wanfang shall also assume the role of the owner or director of the site toward the end-user and tenants of divisible plots.

The second category will be on an area of ​​about indivisible 10 hectares allocated to the implementation of a tourism project.

The third category will be on an area of ​​292 hectares allocated for the establishment of an oil refinery and petrochemical industries complex. The production capacity of the refinery will be about 230 thousand barrels per day. The agreement signed between SEZAD and Oman Wanfang states that the commitment of the company in this context is not limited to the development of the land, but extends to the construction of oil refinery subject to receipt of necessary permits and approvals by the competent authorities in the Sultanate. Oman Wanfang shall also be responsible for reaching agreements with the Rural Areas Electricity Company, Marafiq Company, and Duqm Port Company on its needs of infrastructure facilities built away from the site and utility connections. These shall include, but not limited to electricity, cooling water, access to the utility corridors and port facilities in respect of the supply of gas, crude oil, refined products and the refinery.

The total investment pumped to the construction of the China-Omani industrial park in Duqm until 2022 will be about USD 10 billion.

The agreement stipulates that Oman Wanfang shall develop at least (30%) of the divisible land within (5) years. It also states the need to embark on the construction of the projects on indivisible land (tourism compound) within two years from signing the agreement and that the completion date of the project would be within (4) years from signing of the agreement or return land to SEZAD. As for the oil refinery, if the company does not obtain the necessary permits and approvals, it shall nevertheless develop the site allocated for the construction of the petrochemical complex.

Oman Wanfang asked for permission to build housing facilities to accommodate nearly 25 thousand people supposed to live and work in SEZD, whereas the total required number of employees would be about (11,400) employees until 2022 excluding construction workforce.

The number of projects implemented in the China-Omani industrial park will be about 35 projects: 12 projects in the field of heavy industries including the production of commercial concrete, building materials and related industries, production of glazed glass, methanol and other chemicals. Add to this processing of steel smelting, aluminum production, production of vehicle tires, building materials for protection against water and corrosion, extracting magnesium from seawater, chemical-aromatic projects and others.

In the light industrial zone, there will be 12 projects: production of 1 GW of solar power units, 1 GW of batteries, equipment of (10) thousand private SUVs, production of oil and gas tools, pipelines, and drilling, production of half a million tons of colorful panels, assembling bicycles, garment production, production of games, as well as a variety of other projects.

There will be also (8) projects in mixed-use areas, including: a training center, a school, a hospital offices, and a sports center. The tourism zone shall have a 5-star hotel.

This is in addition to the oil refinery and petrochemical projects.