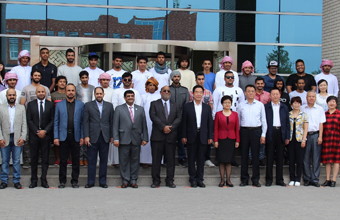 In cooperation with the Wanfang Company Oman

During his recent visit to the Chinese city of Yinchuan, H.E. Yahya bin Said bin Abdullah Al-Jabri, Chairperson of the Special Economic Zone Authority in Duqm (SEZAD), visited the Omani students sent by SEZAD in cooperation with the Oman Wanfang Company at their Ningxia Polytechnic College.

During his visit, Al-Jabri urged the students to work hard and focus on academic achievement stressing that SEZAD is in constant contact with the College's administration to resolve any difficulties facing them. Al-Jabri met with the faculty and academic staff who briefed him on the performance of the Omani students there.

Al-Jabri's visit to students was to find out the levels of their scientific achievement, listen to their views, identify their aspirations and discuss any difficulties facing them.

The number of students studying in the People's Republic of China is 38 who began their studies last March. The duration of the study is two years, after which the student receives a diploma in one of the specialized technical and technological fields, such as renewable energy, oil equipment, petrochemical engineering, economic management, building materials, and computer applications. Ningxia Polytechnic College has recently received academic accreditation by the Ministry of Higher Education.

This is the first batch of students who will work as soon as they graduate in the Chinese companies operating in the Sino-Omani Industrial City in Duqm.

His Excellency's visit to the Omani studies came at the time in which SEZAD announced that the second batch of 50 students would join Ningxia Polytechnic College in the first quarter of next year, bringing the total number of students in the People's Republic of China to 88.

This batch began this September to study English language for 6 months at SEZAD Training Center to qualify them and raise their level in English before sending them to study at Ningxia Polytechnic College for two years to obtain a specialized diploma that would qualify them to work in the companies investing in the Special Economic Zone in Duqm (SEZD). The selection of the students relied on interviews conducted recently giving priority to the students of the Wilayat of Duqm in particular and of Al-Wusta Governorate in general.

These courses are part of SEZAD commitment to improve the efficiency of the human resources of the people of Duqm in particular and Al-Wusta Governorate in general to be able to fill the jobs offered by the companies investing in SEZD. They are also part of the commitment of Oman Wanfang Company to provide about 1000 jobs for young Omanis to work in the projects scheduled in SEZD.

A tribute to the level of Omani students

During the visit of H.E. Yahya bin Said bin Abdullah Al-Jabri, SEZAD Chairperson, the academic and teaching staff at Ningxia Polytechnic College presented an explanation of the academic and training programs offered by the College to the Omani students studying therein. They briefed him on the sports activities, scientific visits, and entertainment programs offered to them. He also visited the student residence and learned about the services provided to them and the meals that the College is keen to provide to Arab students.

The academic and teaching staff of the College praised the level of Omani students, their seriousness and their desire for further academic achievement and continuous development.

For their part, the students presented during the visit an explanation of the progress of the study, the services available at the College and the sports activities they exercise, expressing their gratitude for the opportunities offered to them.

Sorour bin Khadem Al-Junaibi, one of the students studying in the College from Duqm, said that the current stage of the training program includes a number of subjects related to electronic commerce, information systems, logistics, renewable energy, petrochemicals and business management. After completing the foundation stage, he stated, students will move to the specialization stage determined based on their tendencies and grades in the foundation stage.

Ambition and love of work

Al-Junaibi expressed his happiness with his choice to study in China. "I learned a lot through my studies here. The Chinese community we mix with is serious and dedicated to work and has a desire for more learning. We have noted the great interest of the teaching staff and its keenness for us to benefit from our various teaching programs. They also help us to adjust to the nature of life in China and to do everything possible to increase our achievement," indicated Al-Junaibi.

He noted that his time in the Chinese city of Yinchuan instilled ambition, love of work, dedication and the desire to learn more and gain experience in him. "We are learning new things every day, and this is a good opportunity to benefit from the Chinese experience in the College that is keen on our academic excellence. All these elements instilled in us the ambition to achieve the best and to return to the Sultanate with good experience that enables us to contribute positively to the development witnessed by SEZD in particular and the Sultanate in general," added Al-Junaibi.

He explained that the teaching method in the College is good, praising the applied training programs that he described as "excellent" and keep pace with the industrial and technical development witnessed in China, which earns the students good experience.

On behalf of their fellow students, Sorour Al-Junaibi and Nasser Al-Ghafili expressed their thanks and appreciation to SEZAD and Oman Wanfang Company for their training program coupled with direct employment in the companies scheduled in the Sino-Omani Industrial City in Duqm. They stressed that this ambitious project will contribute to a positive change in Duqm.