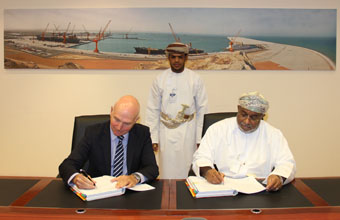 The Special Economic Zone Authority in Duqm (SEZAD) signed on August 30, 2017 an agreement with Boskalis Westminster (Oman) LLC for the construction of the liquid Bulk Berth Project at Duqm Port at a cost of OMR 199.1 million Riyals. The new agreement prepares Duqm Port to export liquid refined products and enhance its value in national economy.

According to the Agreement, Boskalis Westminster (Oman) LLC will carry out detailed engineering designs, construction of marine infrastructure, and dredging and reclamation works, while Worley Parsons Engineering will oversee the engineering and construction works of the project scheduled to be ready within 32 months from the date of awarding. The execution of the project shall be through a unified team of specialists from SEZAD, Worley Parsons Company, and Duqm Refinery Company.

Under the Agreement, 2.4 km of the 4.6 km of secondary wave breakwater will be developed and reclaimed for the construction of the liquid quay, and the dual berth marina will be constructed with accessories and navigation equipment.

The Agreement also provides for the construction of the quay wall of 1 kilometer and installation of buoys and navigational aids devices.

After completion of the project, oil tanks and warehouses for bulk materials and facilities will be built by Duqm Refinery, on the reclaimed land area to export refined products from Duqm Refinery and Petrochemical Industries Area. Examples of refined products to be handled at the Berth shall be naphtha, jet fuel, diesel, High Sulfur Fuel Oil (HSFO) and liquefied petroleum gas, coke and sulfur.

Duqm Port has a unique geographical location close to the international shipping lines and African and Asian markets. It has also an advanced infrastructure. The total length of breakwater is about 8.7 km. The depth of the Port basin is 18 meters and the entry channel is 19 meters. This would qualify the Port to receive and handle giant container vessels.