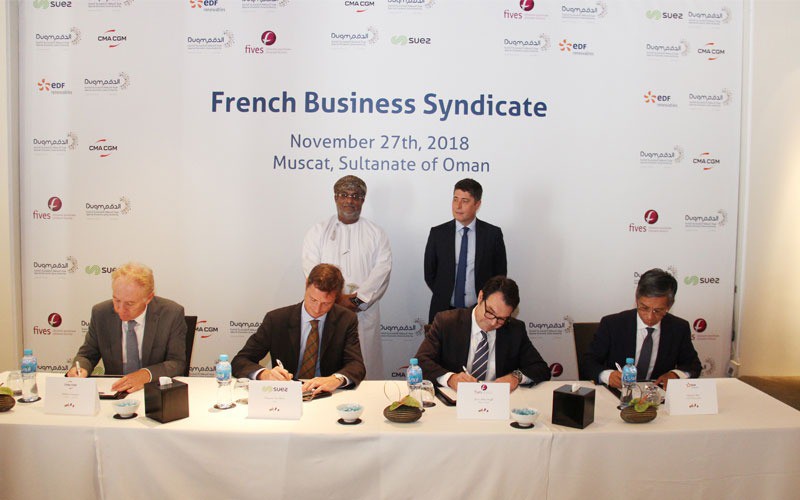 On November 27, 2018, In response to the recent visit in France of H.E. Yahya Al Jabri, Chairman of the Special Economic Zone Authority of Duqm (SEZAD) four leading French investors and technology providers have announced today (November 27, 2018) the creation of a French Business Syndicate to jointly tackle business opportunities in Duqm. This initiative will further strengthen the existing business relationship between the Sultanate of Oman and the Republic of France.

On this occasion, four leading French companies – CMA CGM, EDF Renewables, FIVES and SUEZ - announced the creation of the French Business Syndicate with the goal of assessing various investment possibilities in each of their respective field of activity as well as the possibility to cooperate to bring higher value-propositions within the guidelines defined by the SEZAD and Ithraa. In particular, the French Syndicate showed interest in a global approach to cement factory ecosystems and related facilities (transportation ecosystem facilities, solar power generation plant, production of alternative fuel).

As part of their joint offer, the members also proposed to implement an educational programme to enhance the integration of Omani young generations in the projects they will be entrusted with.

Officials and business leaders gathered to explore and discuss the potential business opportunities presented by the Special Economic Zone Authority of Duqm. The event organized under the patronage of H.E. Yahya Al Jabri and H.E. Renaud Salins, French Ambassador in the Sultanate of Oman.

HE Yahya bin Saeed Al Jabri, Chairman of the Special Economic Zone Authority of Duqm, welcoming the French investments in Duqm. He said the agreement reached by the four companies to study investment opportunities in the zone is in line with the aspirations of the Authority to diversify investments in the economic zone.

“There are direct and indirect economic gains to cover SEZAD and Ithraa strategic goal of boosting the local economy as well as tightening business ties between both countries,” said H.E. Renaud Salins.

The French Business Syndicate is composed by four renowned global French groups: CMA CGM, EDF Renewables, FIVES and SUEZ. They have extensive experience in accompanying the economic and industrial development of countries all around the world by bringing excellence and operational performance. They also share strong Corporate Social Responsibility values and act as responsible corporate citizens in the active protection of the environment and in the development of local human capital.

Its 509 vessels call more than 420 ports in the world on 5 continents. In 2017, they carried nearly 19 million TEUs (twenty-foot equivalent units).

With a presence in 160 countries and through its 755 agencies network, the Group employs 34,000 people worldwide, including 2,400 in its headquarters in Marseilles.

EDF Renewables is a world leader in renewable energy electricity. The company develops, builds and operates clean energy power plants in 22 countries both for our own account and for third parties. Historically, EDF Energies Nouvelles primarily developed its business in two geographical areas, Europe and North America (U.S., Canada and Mexico). Since 2012, the Group has taken position in additional countries with strong renewable energy potential such as Middle-East, South Africa, Chile, Brazil, India and China. As of June 30th 2018 the company's gross installed capacity amounted to 12,486 MW worldwide, with net installed capacity standing at 8,057 MW and gross capacity under construction at 1,743 MW. On April 12th EDF Renewables became EDF Renewables in close to 20 countries to support its expansion in the international renewable energy market.

Fives, an industrial engineering company with a heritage of 200 years, designs and supplies machines, process equipment and production lines for multiple industrial sectors: aerospace, automotive, energy, aluminium, cement, logistics, etc. As a worldwide company, the Group is a partner of key industrial players in the Middle-East, where it has developed major projects such as Sohar Aluminium, Qatar National Cement Company, Petroleum Development Oman, Aluminium Bahrain & Maaden Aluminium. With a network of more than 100 operational units in nearly 30 countries, Fives Group employs 8,700 employees and has generated € 2,117 million of order intake in 2017.

With 90,000 people on the five continents and total revenues of 15.9 billion euros in 2017, SUEZ is a world leader in smart and sustainable resource management. We provide water and waste management solutions that enable cities and industries to optimize their resource management and strengthen their environmental and economic performances, in line with regulatory standards. SUEZ is a leading player in waste and water management in the Middle East. In Oman, the Group supports the authorities in developing innovative solutions to meet the climate challenge and resource management, particularly in Muscat, where the Group built and operates the Barka seawater desalination plant. SUEZ is also present in the waste management sector through SUEZ Al Bashaer and is responsible for operating the capital's municipal waste landfill as well as Sohar Hazardous Waste Landfill.