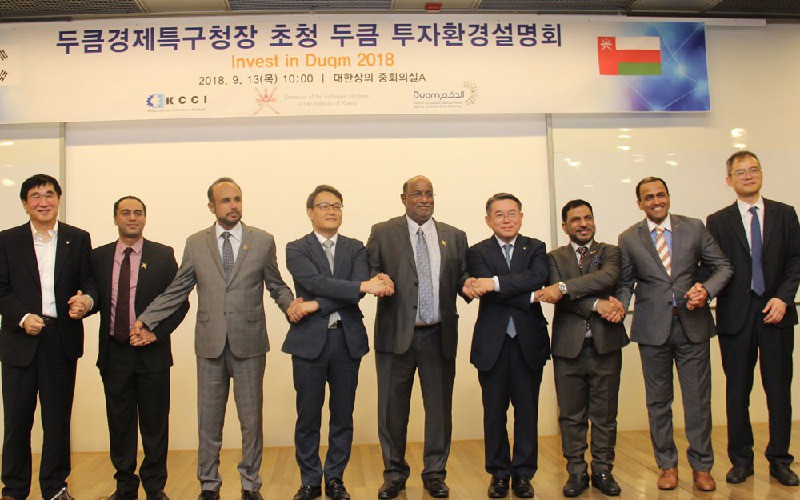 The promotional campaign on the Special Economic Zone in Duqm (SEZD) in the Republic of Korea confirmed the depth of economic relations between the Sultanate and Korea. The campaign, organized by the Special Economic Zone Authority in Duqm (SEZAD) in cooperation with the Sultanate's embassy in Seoul from 13 to 15 September 2018, called for more economic and investment partnerships between both countries.

H.E. Yahya bin Said Al-Jabri, Chair of SEZAD, stated that the he political and economic relations between the Sultanate and the Republic of Korea are witnessing further development and growth, adding that the promotional campaign in Korea underscores the utmost importance of boosting economic and trade relations between the two countries.

"We look forward to this promotion to be an opportunity to explore investment opportunities in SEZD given that the strategic location and political stability of the Sultanate qualify it to be an economic hub in the region," he said in a speech at the 'Invest in Duqm' Symposium on 13 September 2018 in Seoul.

In his speech, H.E. Al-Jabri reviewed the economic importance of Duqm in terms of its strategic location and the advantages and incentives offered by SEZAD to investors calling on businesspersons in Korea to acquaint themselves with the projects in SEZD and the investment opportunities available there.

The promotional campaign in Korea is the third stop of SEZAD in its Asian tour preceded by two Symposiums in the Japanese cities of Tokyo and Osaka.

For his part, H.E. Mohammed bin Salim Al-Harthy, Sultanate's ambassador to the Republic of Korea, praised the efforts of SEZAD to maximize investments. He added that this Symposium is part of SEZAD strategy to increase investments in SEZD and to clarify the investment opportunities available to Korean companies.

At the Symposium, attended by about 100 businesspeople and journalists, H.E. Al-Harthy affirmed the depth of relations between the two friendly countries. He stressed that the Sultanate and Korea enjoy a friendly relationship dating back hundreds of years when Omani and Korean merchants met on the Silk Road. He pointed out H.E. Lee Nak-yeon, the Prime Minister of the Republic of Korea, discussed during his visit to the Sultanate in July several topics to expand the relations between the two countries to include multiple sectors. In this sense, the promotional campaign in Korea comes as a follow-up of the visit and topics discussed to promote relations between both countries.

Al-Harthy said that the promotional campaign in Korea aims at strengthening the economic relations between the Sultanate and Korea pointing out that SEZD is strategically located on the international trade route between East and West. In addition to its strategic location, SEZAD offers many incentives to investors. He highlighted the various investment opportunities that Korean companies can benefit from. "We invite you to take initiatives to invest in Duqm and assure you of our support and cooperation," concluded the Sultanate's ambassador to the Republic of Korea.

The Korean side expressed its desire to develop the economic relations between the Sultanate and Korea. H.E. the Undersecretary of the Korean Ministry of Lands, Infrastructure and Transport, said that the memorandum of understanding signed with SEZAD for cooperation in the field of the establishment of smart cities opens up wider fields for the investment of Korean companies in Duqm. "Duqm is an ideal environment for Korean investments both in terms of the location of SEZD, in terms of the advantages and facilities offered by SEZAD and in terms of the expected return of Korean companies through its investment in Duqm," stated the Korean Undersecretary.

On the same level, the Vice President of the Chamber of Commerce and Industry of Korea praised the Korean investments in the Sultanate, especially in the petrochemical sector, and expressed his hope for further development in economic relations between the two countries.