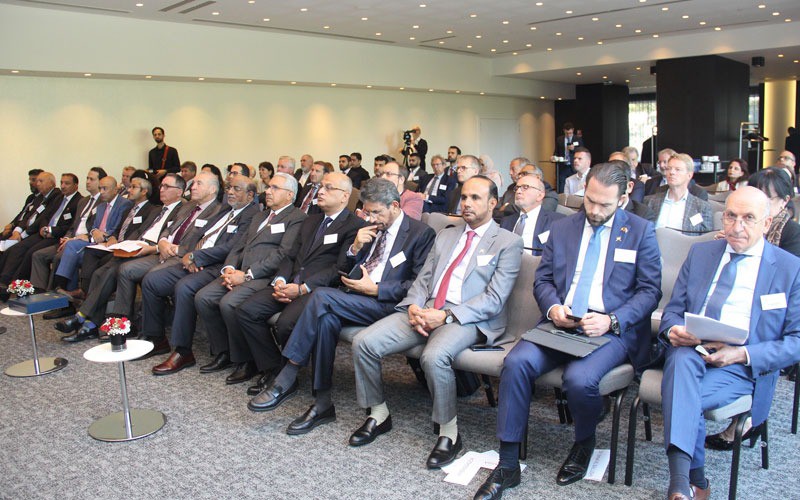 The “Invest in Duqm” promotional campaign, organised by the Special Economic Zone Authority at Duqm (SEZAD), kicked off in the Belgian capital, Brussels, on Monday, September 9. Present at the campaign launch were His Excellency Dr. Raoul Delcorde, Director of the Middle East at the Belgian Ministry of Foreign Affairs, and Johan Beerlandt, President of Arab-Belgian-Luxembourg Chamber of Commerce and His Excellency Najeem bin Sulaiman Al Abri, the Sultanate's Ambassador to the Kingdom of Belgium and the European Union.

Speaking on the occasion, His Excellency Yahya bin Saeed Al Jabri, Chairman of the Special Economic Zone Authority at Duqm, said that the promotional campaign for Duqm in the Kingdom of Belgium seeks to bring more economic and investment cooperation opportunities between the Sultanate and Belgium, reflecting on the growing relations between the two countries. “Belgium currently plays a very crucial role in the development of the Special Economic Zone at Duqm, more specifically, the concession agreement signed with Consortium Antwerp Port (CAP) to manage and operate the Port of Duqm and its industrial land”, Al Jabri pointed out.

“Initiating a dialogue on trade and investment cooperation between The Kingdom of Belgium and the Duqm Special Economic Zone in the Sultanate of Oman is of utmost importance to us. This session emphasises on the great importance we attribute in strengthening our economic and commercial relationship with Belgium” he added.

Highlighting the economic importance of Belgium to the GCC, His Excellency Yahya bin Saeed Al Jabri, Chairman of the Special Economic Zone Authority at Duqm, commented: “In the last decade, Belgium became the leading hub for the fast growing GCC chemicals exports in Europe that has steadily been increasing market share over the years”.

His Excellency also touched on the Sultanate’s strategic location, political stability and proximity to the Asian markets, which enable it to be a major hub for commerce, industry and trade in the region in addition to the incentives and advantages offered for global investors.

During the campaign, a forum was held in which a number of presentations were conducted to familiarise attendees with investment opportunities in Oman. Muhanna Al Sinani, Investment Promotion Specialist at the Public Authority for Investment Promotion and Export Development (Ithraa), shed light on the investment climate in the Sultanate.

Besides, Saleh bin Hamoud Al Hassani, Director General for Investors Services at the Special Economic Zone Authority at Duqm (SEZAD), briefed on the incentives offered by SEZAD to investors and highlighted the current projects in the Zone. Other presentations touched on the Port of Duqm, Dry Dock, Oman Oil Company and Duqm Quarries Company.

The campaign includes organising another forum in Antwerp and other visits to be organised to government officials and companies in Belgium. This promotional campaign for Duqm is part of the ongoing efforts of Special Economic Zone at Duqm to attract new corporates to invest in the Zone.