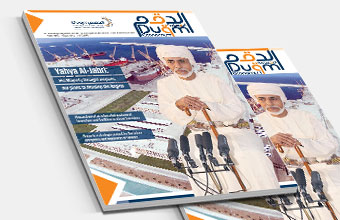 Marking the 45th anniversary of Oman’s blessed Renaissance, The Special Economic Zone Authority of AL Duqm ( SEZAD) published today (Tuesday July 21st 2015) the first issue of its quarterly magazine “The Duqm Economic ”, the first magazine of its kind in the sultanate to be  specialized in economic & free zones affairs.

The magazine which is issued in Arabic & English aims at highlighting the projects that are being implemented in AL Duqm Economic Zone, observing the progress of  these projects & showcasing the available investment opportunities by energizing local investments & attracting foreign investments.  It also aims at creating awareness of the importance of the Economic Zone in supporting the national economy, creating job opportunities for Omanis & enhancing social & economic growth at Al Wuste governorate while shedding lights on SEZAD role in this sector.
The magazine edited by Mohamed bin Ahmed AL Shezawi, manager of  Media department & chief editor of the magazine, sought to enrich knowledge  of Economic & Free Zones in the Sultanate & various parts of the world & provide information about the nature, activities & challenges of economic zones through specialized surveys & reports.
In a statement, H.E Yahiya bin Said bin Abdullah  AL Jabri, Chairman of SEZAD and the general supervisor of “The Duqm Economic “ magazine said that issuing the first edition  of “The Duqm Economic “ magazine  coincides  with a very valuable occasion, the 45th  anniversary of the modern renaissance, which begun on July 23rd  1970  & made our dreams and ambition a  reality.
In the editorial of the first issue, Al Jabri hailed the achievements of the Sultanate under the wise rule of His Majesty Sultan Qaboos bin Said, pointing out that the Sultanate has early realized the importance of diversifying sources of national income & infrastructure all over the Sultanate. He also pointed out that the Special Economic Zone of AL Duqm is one of the government plans towards economic diversification in view of the potentials that the region is enjoying, emphasizing that SEZAD is working towards founding an integrated modern city that meet new generation’s aspirations & make the Sultanate vision of economic diversification a reality.
The first issue which comes in (116) pages included a number of articles, one of which is a dialogue with SEZAD deputy CEO, Ismail bin   Ahmed AL Balushi, about SEZAD effort in promoting the region and a dialogue with Eng. Yahiya bin Khamis Al Zedjali, in charge of planning and follow-up of engineering projects, about the planning studies of AL Duqm and its role in the development of ALWusta governance.
The first issue mainly focused on One Stop Shop department as the key gate to investment at Duqm. It also included a number of reports, surveys and news about SEZAD and the companies operating in the Economic Zone.