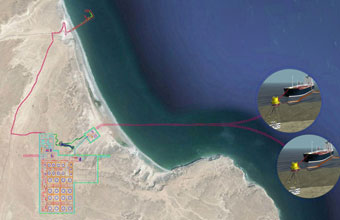 The aim of the project is to support and realise the future goals of the Omani economy including the diversification of the national income.
The project’s most important components include setting up of warehouses for storage and export of crude oil which would enhance the benefit from crude oil trade sector thereby boosting benefit from the related industries.

This goal can be achieved by exploiting the location and cutting cost of production, thus boosting revenues from the oil sector as well as enhancing the added value of the natural depths of the Arabian Sea and linking the commercial interests of companies operating in oil production and marketing sector.
The Special Economic Zone Authority at Duqm (SEZAD) has accorded special attention to the project due to its socio-economic value.
In October last year, Oman Tank Terminal Company (OTTCO), an Oman Oil Company (OIC) subsidiary, finalised the initial designs for the crude oil storage terminal at Ras Markaz area and it will be built in phases, the first of which is expected to be completed and operated in coincidence with the launch of Duqm refinery.
The Ras Markaz crude oil terminal is considered a warehousing facility matching the best international standards and planned to be the largest of its kind in the Middle East region, as well as an international oil storage hub by providing easy access to oil markets in South Asia, Far East and Africa.

An area exceeding 1,600 hectares has been earmarked with a crude oil storage capacity of 200 million barrels.
The terminal will be linked to the oil fields via and the Duqm refinery thereby easing oil transfer by land from the warehousing facilities, besides the sea installations which will meet the needs oil tankers.

The terminal will also supply the Duqm refinery with crude oil which will contribute to the setting up of heavy industries and petrochemical plants in the special economic zone.