Speech delivered by H.E. Yahya bin Saeed Al Jabri, Chairman of the Board of Directors of the Special Economic Zone Authority at Duqm paid tribute to the instructions of His Majesty 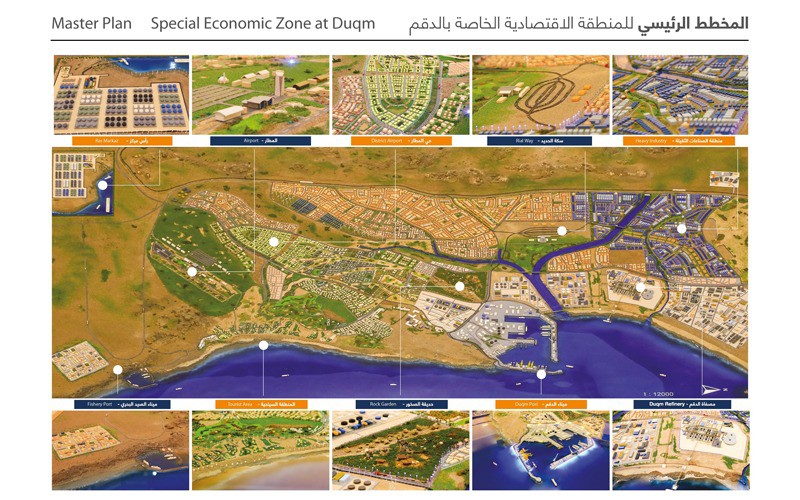 His Excellency Yahya bin Said Al Jabri , Chairman of Board of Directors of the Special Economic Zone at Duqm paid tribute to the  instructions of His Majesty  Sultan Qaboos bin Said - may God protect him – to the Council of Ministers to create the right climate to attract more domestic and foreign investments, especially in the free industrial and economic zones.

His Excellency said in a press interview that the directives of His Majesty delivered during his presidency of the cabinet meeting last week are the focus of attention, diligence and commitment of the Authority, stressing that the Authority is keen to simplify the investment procedures for investors from the Sultanate and abroad. He pointed out that the Authority's efforts in this area contributed to increasing investments in the zone.

His Excellency emphasized also that the Special Economic Zone Authority at Duqm is working on putting the directives of His Majesty the Sultan in execution upon issuance, commending the high trust of His Majesty Sultan Qaboos bin Said and his continuous follow-up to work progress of the zone.

Developing & establishment of a university city

H.E. Yahya bin Said Al Jabri announces that this month of May a contract for the development and establishment of a university city, including a private college, to teach the subjects relevant to projects now existing in the Special Economic Zone at Duqm was signed. H.E. also said that this year would witness the groundbreaking of the project which will be on an area of one million square meters.

Agreements signed in the first quarter of the year

His Excellency stated that the first quarter of this year witnessed the signing of 19 usufruct agreements with Omani and foreign investors, including a usufruct agreement concluded with Dhofar Fisheries and Food Industries Company SAOG for the purpose of establishing a factory for fish packaging and canning and fish oil production, , in addition to a number of other projects covering industrial, tourism, commercial, and service sectors and residential commercial projects .

He explained that the total area of land that has been granted to investors since January 1, 2019 until the beginning of May is about 1.2 million square meters.

A variety of investing nationalities

His Excellency the Chairman of the Board of Directors of the Special Economic Zone at Duqm praises the level of demand witnessed by the zone and said that there are around 20 investing nationalities in the zone from different countries around the world, hinting that the Authority also emphasizes the importance that Omani investors would strongly be present in the zone. For this purpose, a number of domestic seminars were held and toured various governorates of the Sultanate and met with businessmen and urged them to take advantage of the investment opportunities available in Duqm and the incentives and facilities provided by the Authority to investors. The meetings held by the Authority in the private sectors resulted in many Omani companies investing in Duqm, referring particularly to the attention paid to the small and average-size companies which enabled them to be awarded many work opportunities, whether by the authority or the businesses already operating in the zone.

Results of Omani representatives participation in the belt and road forum

His Excellency Yahya bin Said Al Jabri speaks out the Omani participation in the belt and road forum held in the Chinese capital, Beijing, from 25 to 27 of April 2019. He added that the Sultanate delegation participating in the forum included officials from Ethraa and the Special Economic Zone Authority at Duqm and the State Reserve Fund and the Central Bank of Oman, pointing out that the talks with the Chinese counterparts highlighted the support of the Chinese Industrial Park project in Duqm and developing an action plan to complete the implementation of investment projects that Wanfang Company plans to executed in the park, with an estimated cost of about 10,7 billion US dollars. H.E. also adds that now the commercial and residential center is under construction in the park and some other projects will follow, most importantly establishment of a construction materials market. H.E. explains that during the forum a number of memorandums of understanding were signed to implement 3 new projects in fish and light industries.

His Excellency Yahya bin Said Al Jabri reviewed the workflow in the infrastructure projects in the Special Economic Zone at Duqm, and said that the fourth package of Duqm port related to the government quay is now under the delivery procedures from the contractor, pointing out that the government quay is deemed the first integrated dock executed in the ports of Oman to serve government agencies, with a length of 980 meters. It is one of the most important security facilities in Duqm port which will provide readiness to manage logistics operations for such entities and to provide the security aspect for the port and the entire zone.

H.E also discussed the progress of work in the second package of Duqm port in relation to the commercial dock. He said that now the completed parts of the dock are being delivered to the Duqm port company in order not to affect the current operations at the port that need to continue uninterruptedly while the executing company maintains execution pace of the project. H.E expected that works of the second package would be completed in the first half of next year, considering, he added, that the current works on the commercial quay include the construction of four stations on the commercial quay, including two container stations with a length of about 1,600 meters to handle about 3.5 million containers per year, a station for bulk  dry materials with a capacity of about 5 million metric tons per year, and a multi - use station with a capacity of about 800 thousand metric tons per year. The second package also includes the establishment of the operations area in the port.

His Excellency also tackled the workflow in the seventh package of Duqm port relating to the oil berth. H.E. stated that some milestones of the project were completed this year, but the increasing demand on the port made it necessary to set a plan to develop and expand the oil berth in order to meet the requirements of the new oil companies wishing to invest in Duqm, such as the international Shell, Occidental Co., and Oxia Co. based in Houston, the USA.

Increasing the depth of the fishing port

On the sea fishing port project, H.E. Yahya bin Said Al Jabri announced that the Authority decided to increase the depth of the port from 6 meters to 10 meters in order to prepare the port to attract large fishing vessels operating on the deep sea and to increase the economic value of the port which will be a major center for fish industries in the Sultanate and the zone. He explained that the fishing port in Duqm is considered the largest fishing port in the Sultanate, having an area of ​​600 hectares and including a fish industry zone that is expected to host about 60 entities specialized in the field of fish processing, canning and other fish industries.

Development of the infrastructure in the zone

H.E. Yahya bin Said Al Jabri emphasized that the Authority pays considerate attention developing the infrastructure of the special economic zone of Duqm, and explained that a number projects are under execution now, especially in road works, whereas various investment areas are linked together. H.E. also extended that during this month 7 new agreements in infrastructure sector in the zone will be signed.

On the investment projects in the zone, H.E. said that this year witnessed the groundbreaking of construction works in Duqm refinery, and that works started on the integrated station of electricity and water, and the commercial operations of the refinery producing Sebacic acid. H.E added that in the coming period will witness the launch of construction works of bus assembly plant, which is established held by investments from the Qatari Karwa Company and the Investment Fund of Oman, not mentioning many other projects.

H.E. Yahya Bin Said Al Jabri, the Chairman of the Special Economic Zone Authority at Duqm, concluded his speech by emphasizing the local and international attention paid to the zone. H.E. confirmed that a lot of benefits have been achieved over the past years in the Special Economic Zone at Duqm, not only did it include the development of the zone, rendering it a developmental hub, creating job opportunities for citizens, and securing an opportunity for Omani companies to invest in the Sultanate, and providing diverse work opportunities for small and medium-size enterprises but also highlight the economic importance of the zone located on the international shipping lines, resulting in the attraction of many international companies.